Line is an endlessly fascinating element of drawing. Strictly speaking there are no lines in nature, so the use of line is entirely abstract. In spite of this, line use seems to be a near-universally accepted convention among people throughout the world. As discussed in the previous Journal post line is often the first thing we turn to when drawing as children. Across times, cultures and languages line has endured as the most direct form of visual communication. It is a key tool in our box as artists and it serves us well to give it due respect and attention. 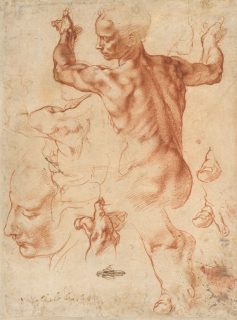 While line is often associated with things seen it actually relates and appeals far more to the sense of touch than of sight. We put lines around things as we feel them, which is to say the contour line of an object is really the felt limit of the physical space of an object. Such limits may not even necessarily be seen in the literal shapes of colour we can see before us yet we will still feel the need to indicate this felt contour. In this Journal post, we will endeavour to explore and explain some of the ways in which line has been used by artists throughout the ages. There are as many different ways to use line as there are artists that have used them, but even so we will explore a few of the key aspects of line that may be an appropriate jumping off point in your own experiments with line. 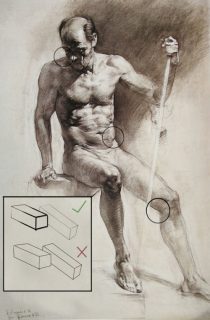 One important quality of line too often ignored in the work of beginners is the visual ‘weight’of the line. When we talk of line weight what we mean is the visual contrast of the line. There are many ways to vary this contrast and many uses for varying line weight throughout a drawing. We can make a line thicker, darker or sharper to increase this perceived ‘weight’ or we can do the reverse to lessen it. One of the myriad uses for varied line weight is to support and make more clear the perceived space within a particular drawn work. We see this idea displayed in this wonderfully designed academic figure drawing by Nicolai Blohkin. Note how the knee in front is surrounded by extremely dark, thick, weighty lines and the leg behind it is drawn with softer, lighter, less weighty lines giving us a strong sense of the knee being in front. Note also how this same idea is used throughout the figure in more subtle ways to better communicate which form is in front as forms pass in front of and behind each other. A selection of these instances have been circled for clarity – see how many more you can spot! 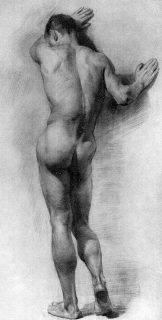 Line weight can also be used to support and represent the idea of the light and its direction as it hits the form. We see a clear example of this motivation for varied line weight in this beautiful academic study by an unknown Russian artist. Note how the contour of the shadow side of the torso (stage right) is represented with thick, dark, weighty lines. While the light side is represented with thin, low contrast lines. In some places in the light the line is even lost entirely, giving way to simple shapes of tone. 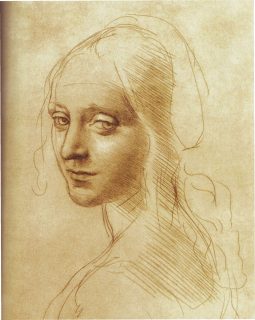 This idea of using line to support the light direction is not limited to purely its use for information on the contour of our drawing. In this glorious drawing by Leonardo da Vinci we see a beautiful example of another use for this simple idea in how he has chosen to approach hatching out the form. Hatching, in drawing, refers to a group of lines placed closed together on a drawing. When many lines are grouped this way they can be used to represent tone. Used in this way line can be used to bring form to a drawing, sometimes in a more emphatic way than a pure adherence to nature would accomplish. In this drawing the clear choice by Leonardo was to place all of his hatching lines in the same direction as the light falling on the head. This lends an added harmonious sense of light to the drawing. 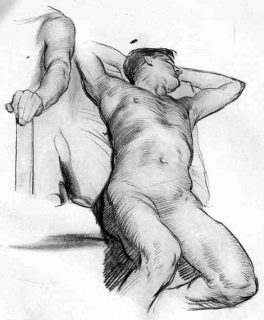 For another perspective on the use of this hatching, let’s turn to this drawing by Harold Speed. Where Da Vinci chose to follow the direction of the light, Speed chose a different motivation for the direction of his hatching, that of form. Every hatch line in Speed’s drawing closely follows and emphasises the myriad and subtle changes in the form of this figure. In this foreshortened figure, this aesthetic choice brings forth the bulk, emphasising the solid mass of the figure in space where Leonardo emphasised the harmony of the light striking the form. There are as many different ways to use a line as there are artists that have used them. These are only a few of those ways. We hope that some of these ideas may aid you in exploring this fascinating quality in your own work.

A Goodbye Letter from LARA’s Director