Inside Art with Luca Indraccolo

Can you explain your style?

“Describing my own style is probably one of the hardest things for me to do as an artist. My paintings are representational, however, I consider myself more of an impressionist painter than a realist. I’m not using ‘impressionist’ in terms of the famous impressionism movement, but instead to describe the use of paint so that it suggests the visual impression of the subject rather than overly rendering each form.

With my work I like to play with the perception of reality by using different vantage points within the same painting, creating a photographically impossible scene (like my painting of an eel for example).

Each painting starts with a clear idea of what the concept and composition will be, which I sketch quickly as a thumbnail to make a visual note. Next the lengthy process of turning that idea into a painting begins. I don’t settle until my original vision comes to life, sometimes even sculpting my own props so I don’t have to compromise on the original inspiration.

I believe that mastering the art of painting is essential to be able to express yourself eloquently through your work. The skills I’ve acquired through the rigorous atelier training allow me to communicate the desired feelings and ideas in my paintings, without being hindered by technical limitations.”

How did you get into art?

“My grandfather was a painter, and I remember wanting to sit next to him and watch him paint rather than play football with my cousins. I guess in a way I’ve always had the ‘painting bug’, which is what lead me to pursue a career as a commercial graphic designer and art director in advertising. After paying my dues (or jail sentence depending on how you look at it) I gave up my 15 year career to go back to school and train to become a painter.”

What message are you trying to convey with your art?

“I strive to create paintings that communicate the character of my birthplace: Naples, Italy. I want people to see this complex city through my eyes. Though my primary inspiration is Naples, my work captures the urban spirit that I’ve found in cities all around the world. Leaving Italy at 19, I’ve spent most of my life living in other countries. This gives me the unique position to present Neapolitan culture as both insider and outsider. With my work I strive to offer a glimpse into urban life that feels both personal and objectively removed.”

Why do you paint the way you do?

“I paint the way I do because of the art I was exposed to growing up. The city’s churches are filled with paintings that brilliantly reflect the moody light that filters though the narrow streets of Naples. I remember standing before Caravaggio’s ‘The Seven Works of Mercy’ as a small boy and I was in awe.

Another Neapolitan painter that I admire immensely is Antonio Mancini. What captivates me about his work is the loose paint handling and strong textures that deftly suggest a visual impression rather than laboriously describing it. This leaves room for the viewer’s imagination and emotions to fill the gaps, and it’s something I incorporate in my work. I also feel that the grit of Neapolitan life is best captured with
a rough paint texture rather than a smooth polished finish.”

Who are your inspirations?

“There are so many painters that I find inspirational that there wouldn’t be room here to list them all, but I’ll try to name a few: Caravaggio, Titian (who in my view was the first impressionist), Russian and eastern European painters like Ilya Repin, Nicolai Fetchin, Gyula Benczur, 19th century Italian masters such as Cesare Tallone, Giacomo Favretto and of course Velasquez and Rembrandt. I also love more recent painters like Lucian Freud, Jenny Saville, and Chuck Close. As I said it’s a long list that could go on forever.”

What techniques have you learned at LARA?

“Well, put simply I learned how to paint at LARA. Over the past 20 years I’ve constantly tried to refine my drawing and painting skills, mostly by myself or sporadically attending classes here and there. However, I was very disappointed to realise that most of the classes I took where led by poorly trained artists with little of no knowledge of the skills they claimed to possess, and I found trying to study on my own very frustrating due to my own shortcomings. At LARA I found the training I was looking for, and found LARA’s philosophy of passing on essential drawing and painting skills without imposing a particular aesthetic to be very refreshing.”

How you do you feel about LARA’s teaching methods?

“The method of teaching employed at LARA is time-tested and effective. It’s only through this rigorous training that pupils complete the program and graduate with the highest level of technical skills. This ability gives the students the confidence to pursue their true artistic vision, without compromising their ideas for lack of drawing and painting skills.”

Luca Indraccolo teaches several courses at LARA. His paintings are featured in the upcoming exhibition “Atelier | the Art of Representation” December 1st – 4th at Mall Galleries, London. More than 25 artists, all trained in the atelier style and handpicked for their creativity and vision will unveil their work at this exhibition. If you’re in the area it’s certainly worth having a look. 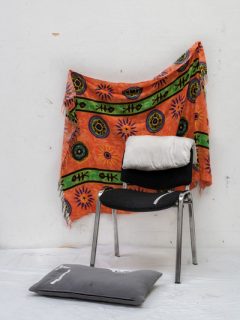 Body of Work: A Project on Life Models by Fra Beecher