Femininity and Masculinity in Art 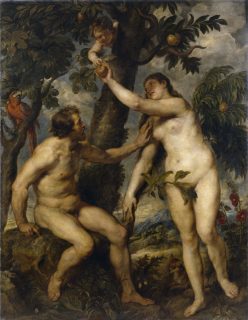 One of the qualities often most interesting to students beginning their figure drawing journey are the visual differences between men and women. This perceived ‘masculinity’ and ‘femininity’ obviously exists on a spectrum – people come in all shapes and sizes. The differences in the sexes has been a subject thoroughly explored in the history of art. The ideas of what constitutes an ‘ideal’ masculine or feminine form have shifted greatly through time and across cultures. As in all things artistic, there appear to be there are no hard rules or formulas. However, there are some useful ideas we can discuss and explore to help point us in the right direction. 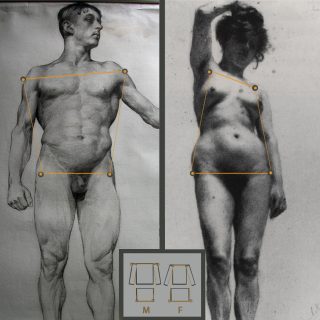 The first of these ideas, and probably the most powerful, lies in the relationship between the shoulder width and the width of the hips, and the general graphic shape of the torso created by this relationship. Men tend to develop broader ribcages and smaller hips, creating a triangle tapering down towards the hips. This relationship is often accentuated in men by the powerful muscles of the shoulders pushing this width at the top even wider. In women generally the reverse relationship is true. The female form will generally be composed of larger hips and smaller ribcages, forming a more pyramidal shape which tapers upwards. 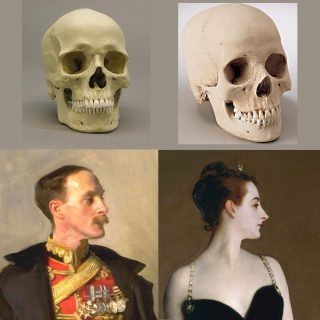 Another idea, useful in portraiture, is most clearly seen when we examine the female skull side by side with the male skull. As we can see above, the male skull contains more extreme planar facets and changes. Most of these planar changes are related to muscular attachments, they serve as surfaces for the muscles to pull on. As men tend to carry more muscular mass, these planes are more extremely marked and prominent. While in the female skull all of the same muscles and muscular attachments are present they appear more ‘rounded off’ and less prominent. In the live portrait, this has the effect of men having generally more hard edged, planar information. While the female portrait has more of a tendency towards softer, more subtle information. As artists we can use this knowledge to help us to emphasise these aspects in our portraiture. Above we have two wonderful examples of this idea in these two portraits by the great John Singer Sargent. Note the more prominent anatomical information present in the portrait of colonel Ian Hamilton versus the subtle simplicity of the famous ‘Madame X’. 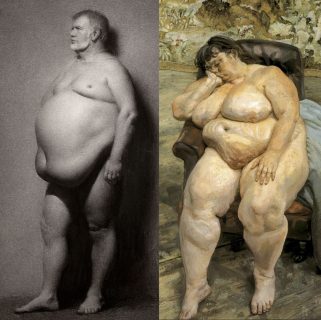 Another element that has a profound impact on the differing forms of the male and the female lies in the way we store fat. We can see the differences of this with most clarity when observing the extremes of both genders side by side. As we can see by the two artworks above, Lucian Freud’s ‘Sleeping by the Lion’s Carpet’ pictured on the right and my own drawing ‘Patrick’ on the left, men tend to store fat primarily in the gut area while women will tend to store fat more evenly throughout their figure. Note how relatively slim the arms and legs remain on the study on the left even on such an extreme bodytype.

Any of these ideas are only useful as guides and shouldn’t be thought of as formulaes -they’re only helpful nudges. Bodies, of course, come in all shapes and sizes. LARA strives to teach its students to find the beauty in all bodies.

A Goodbye Letter from LARA’s Director